To determine the leakage behavior of the DeltaV-Seal at a cryogenic temperature of -196°C using a BFJ to simulate a real cryogenic application.

Previous tests have shown that DeltaV-Seal™ reached the detection level of the sensor used 1*10-5 mg/(s*m) at cryogenic temperatures -50°C, -100°C, and -150°C. The same dimension with initial gasket stress of 600 MPa but also 800 MPa was tested. Internal helium pressure was 40 bar during this test. The actual cryogenic leak rate could not be determined. The leak rate was therefore conservatively set to a value of 1.1*10-5 mg/(s*m), which was near the limit of the detector. The lowest possible detection level was reached both for 600 MPa and 800 MPa.

This test was set up to find out exactly how much lower the leak rate actually is in a real BFJ at a temperature of -196°C.

Since initial deformation of flange gaskets normally happen at ambient temperature in real installations, the DeltaV-Seal gasket was assembled at room temperature. Recommended gasket stress was 600 MPa which is equal to a total bolt force of 214 kN for this dimension. 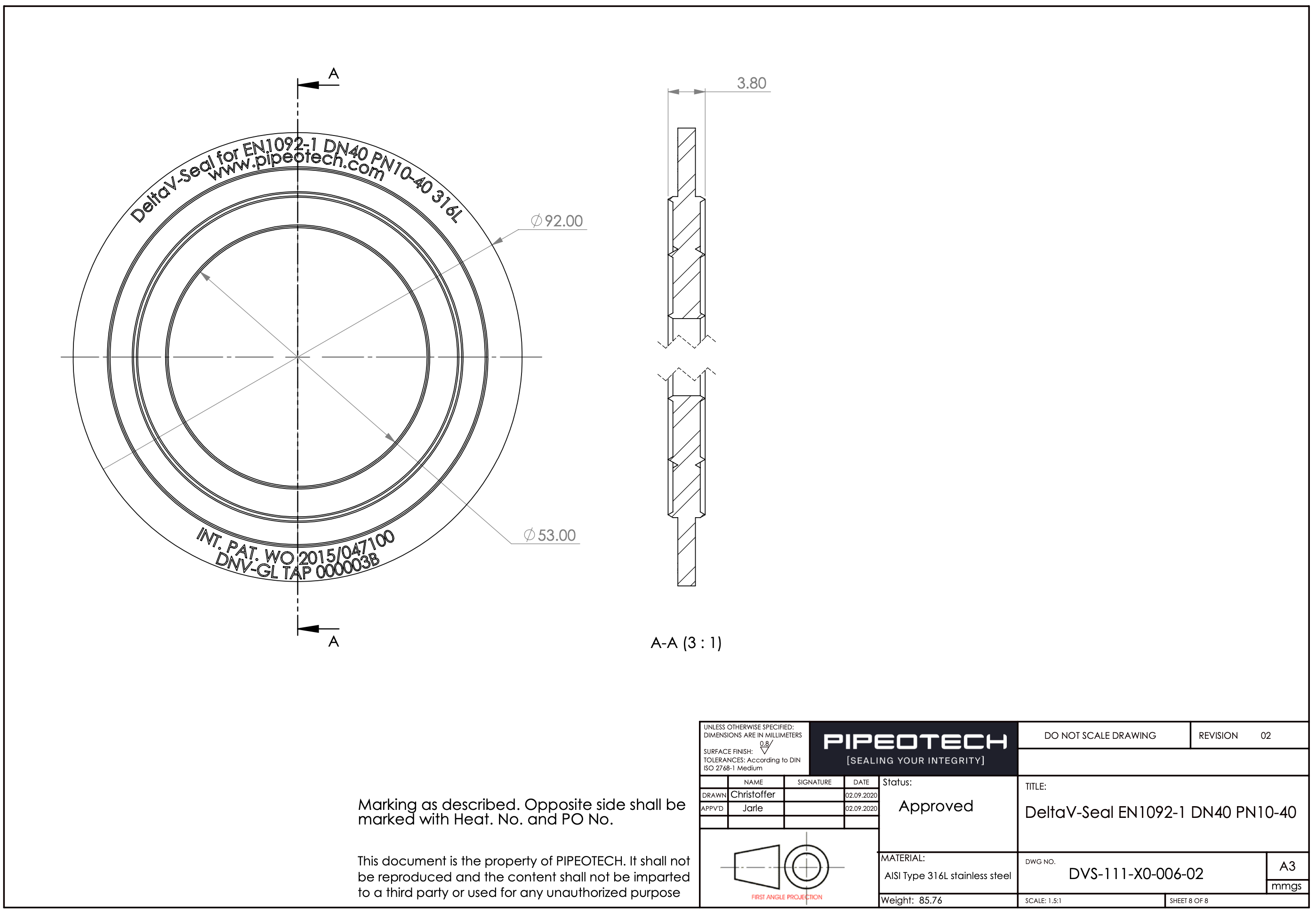 The gasket dimension for testing was DeltaV-Seal DN40 PN40, a one-piece metal gasket made of stainless steel 316L material. Test samples No.1, No.2, and No.3 went through the exact same test. 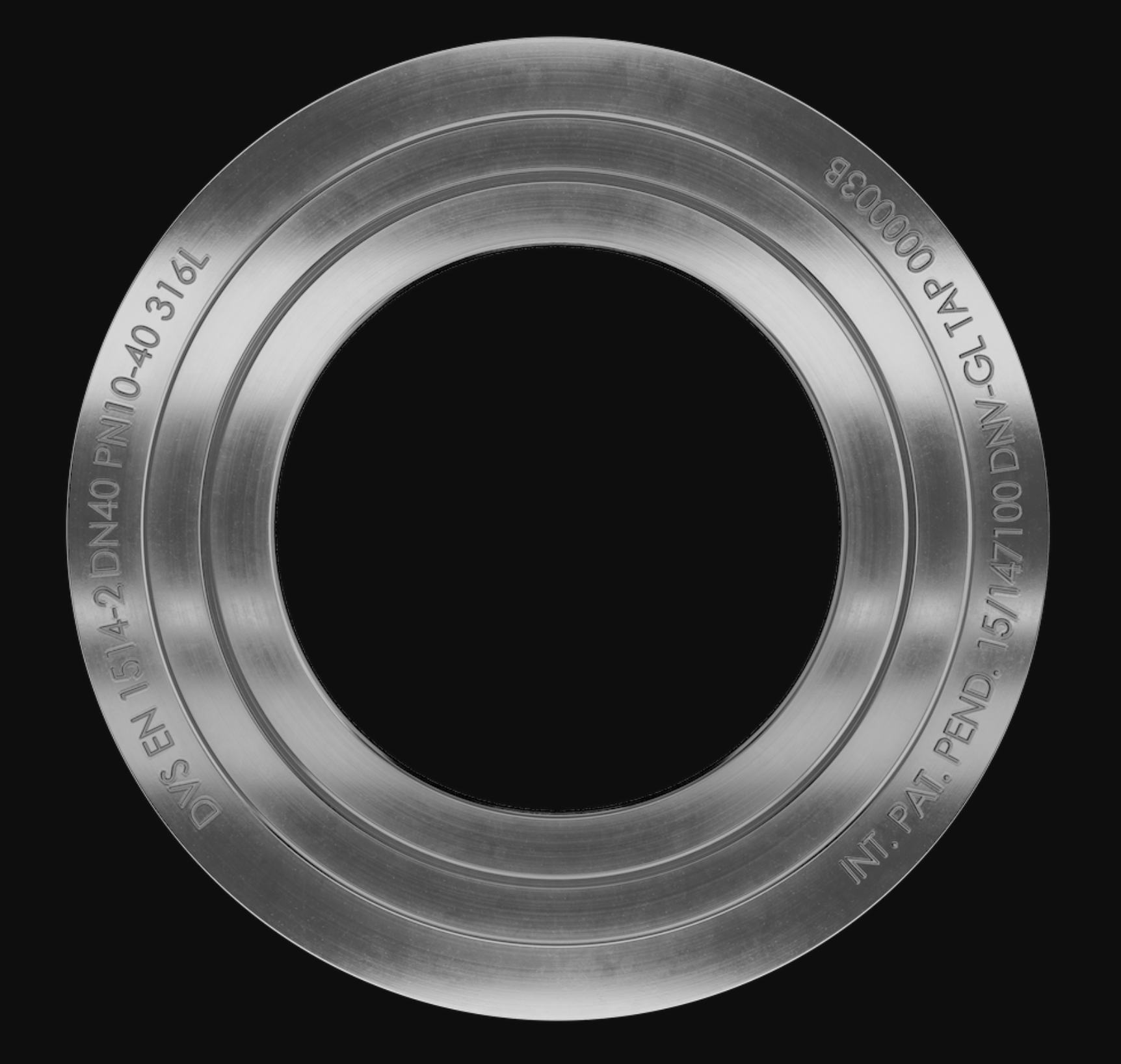 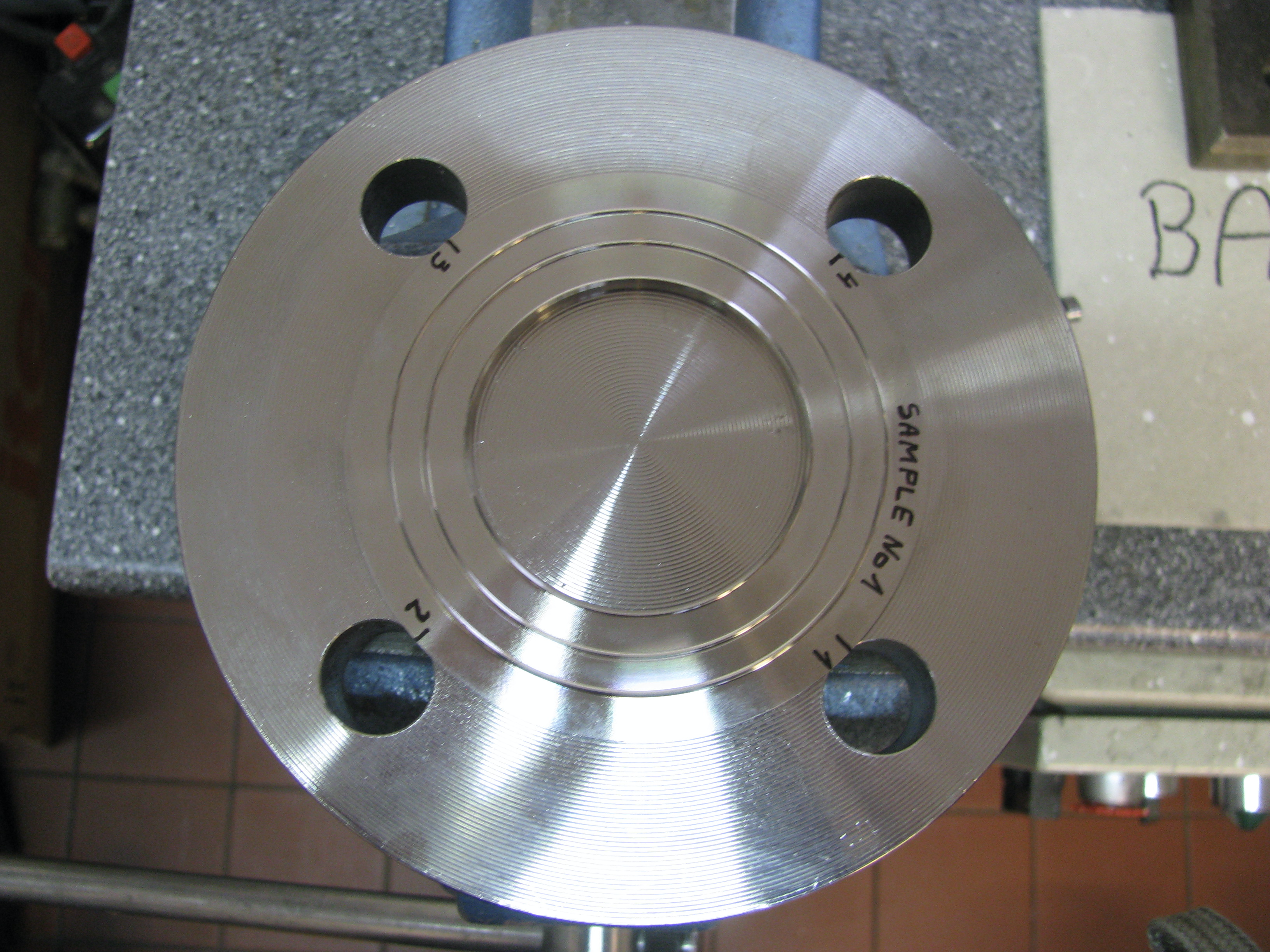 DeltaV-Seal Sample No.1 on top of the blind flange prior to assembly 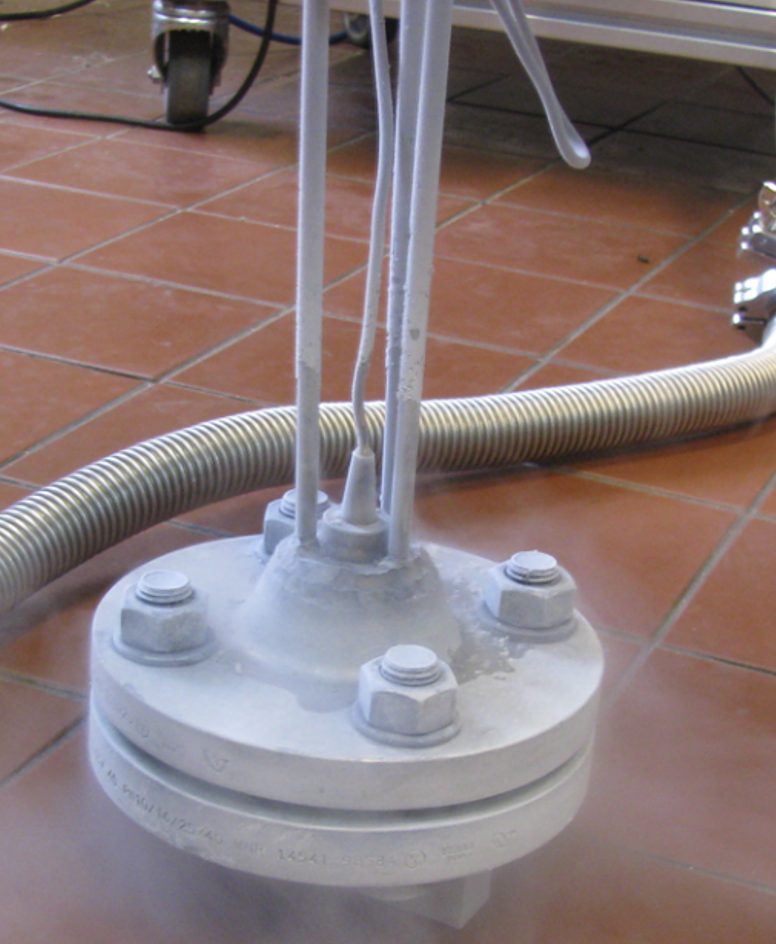 Then the joint was placed and tightly closed in the testing chamber.

Next, the vacuum pumps were started up. The pressure in the chamber was approximately 4*10-3 mbar. When the suitable vacuum was reached the leakage detector was started up. Next, the gasketed joint was pressurized by gaseous helium in the range from 10 bar to 100 bar in 10 bar increments. At each pressure point, the leakage of helium was measured. When the temperature of the flange was above -186.2°C (5% different from the start temperature) the joint was immersed in the liquid nitrogen again.

Schematic chart of the test rig 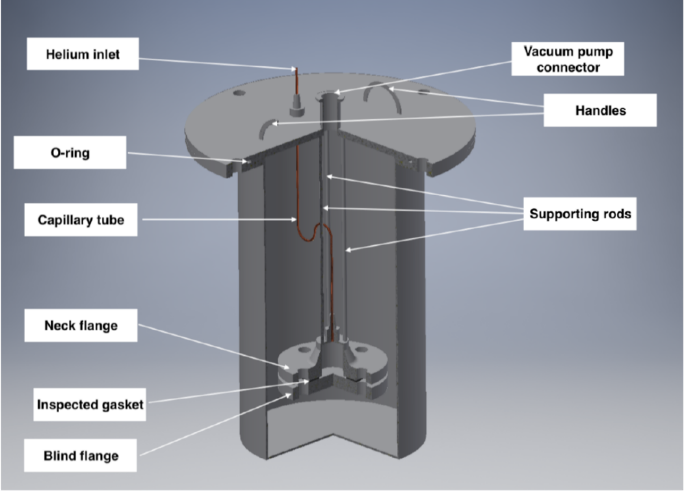 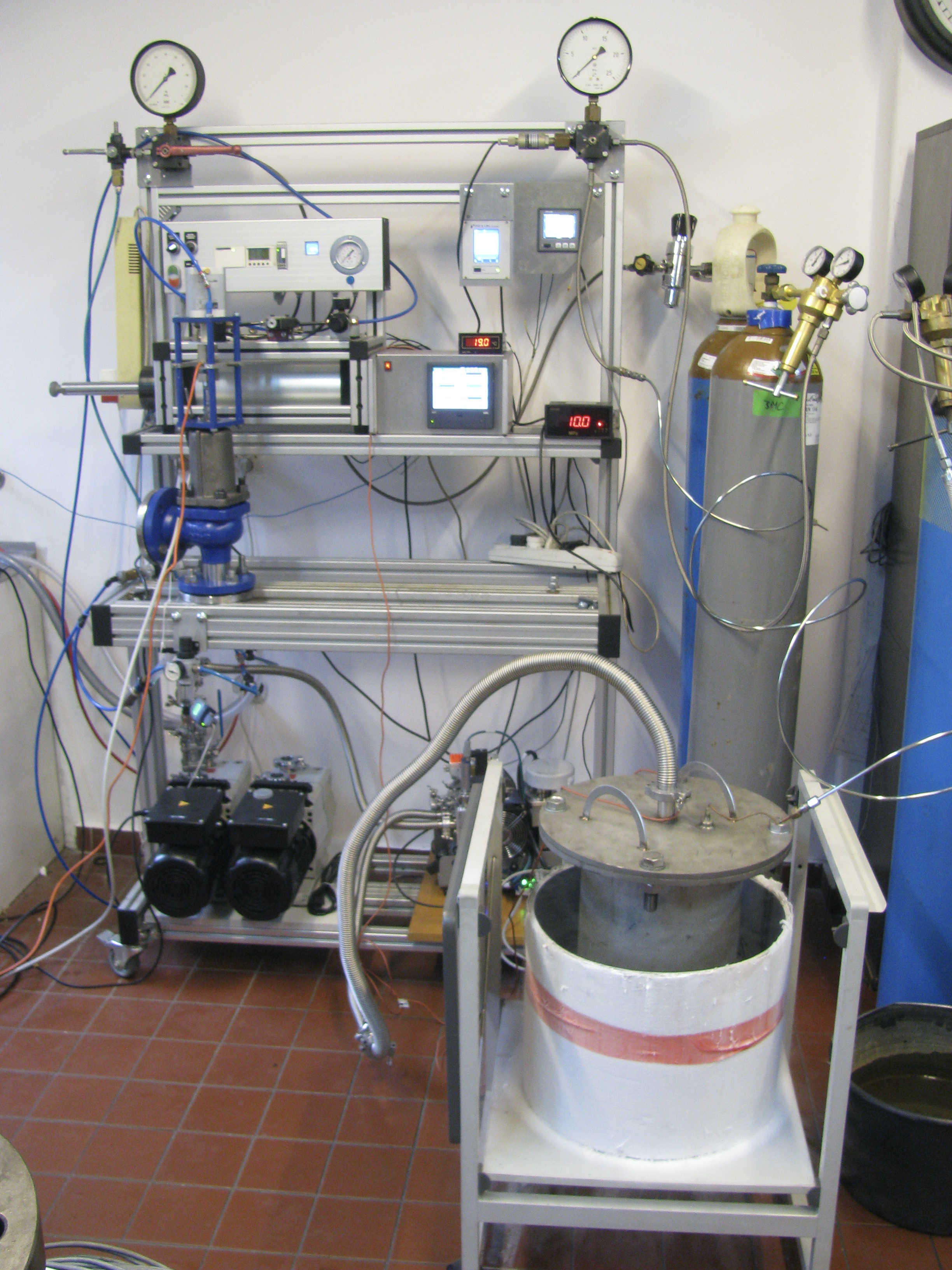 Volume flow example (leakage as a function of helium pressure for sample No.1 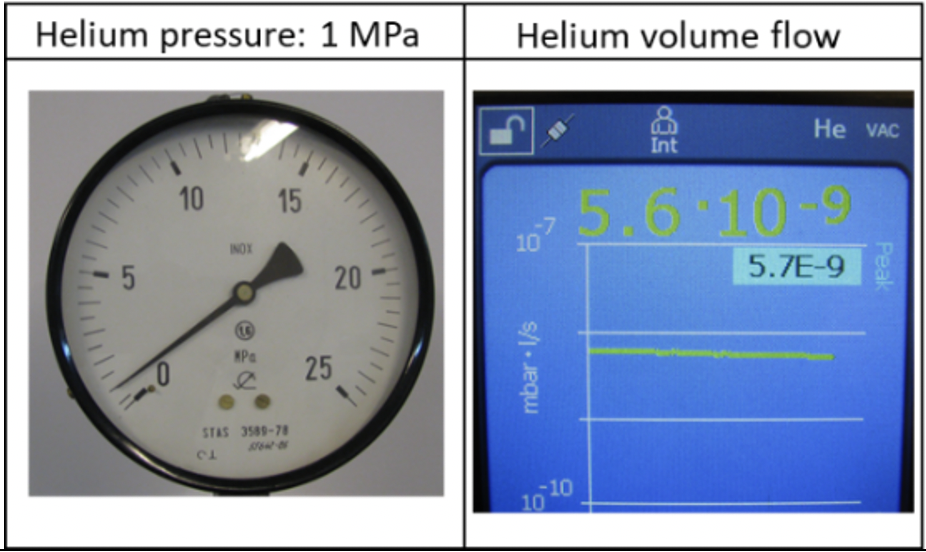 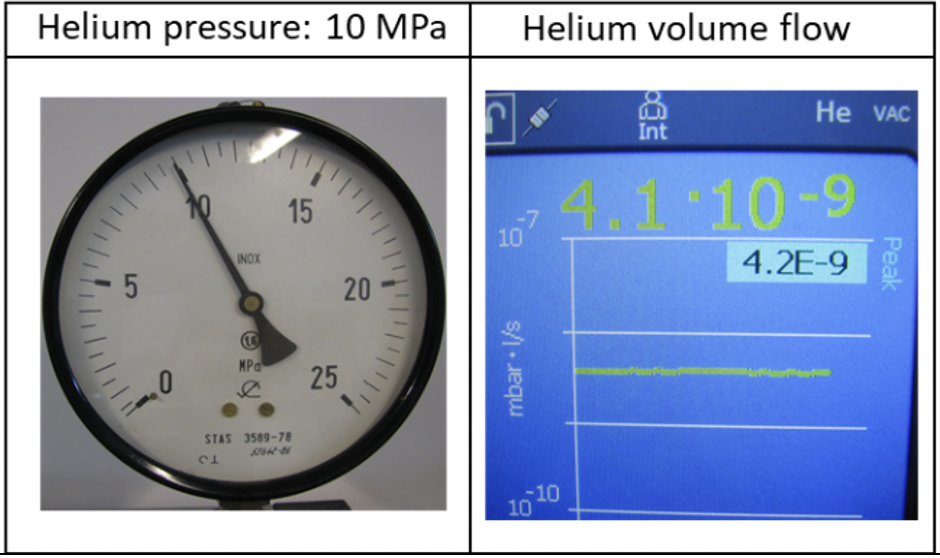 Based on the converted leakage rates (mg/s), the specific leakage rates [mg/(m*s)] were calculated based on the gasket circumference of 0.2 meters for each of the three test samples and shown in the graph below. 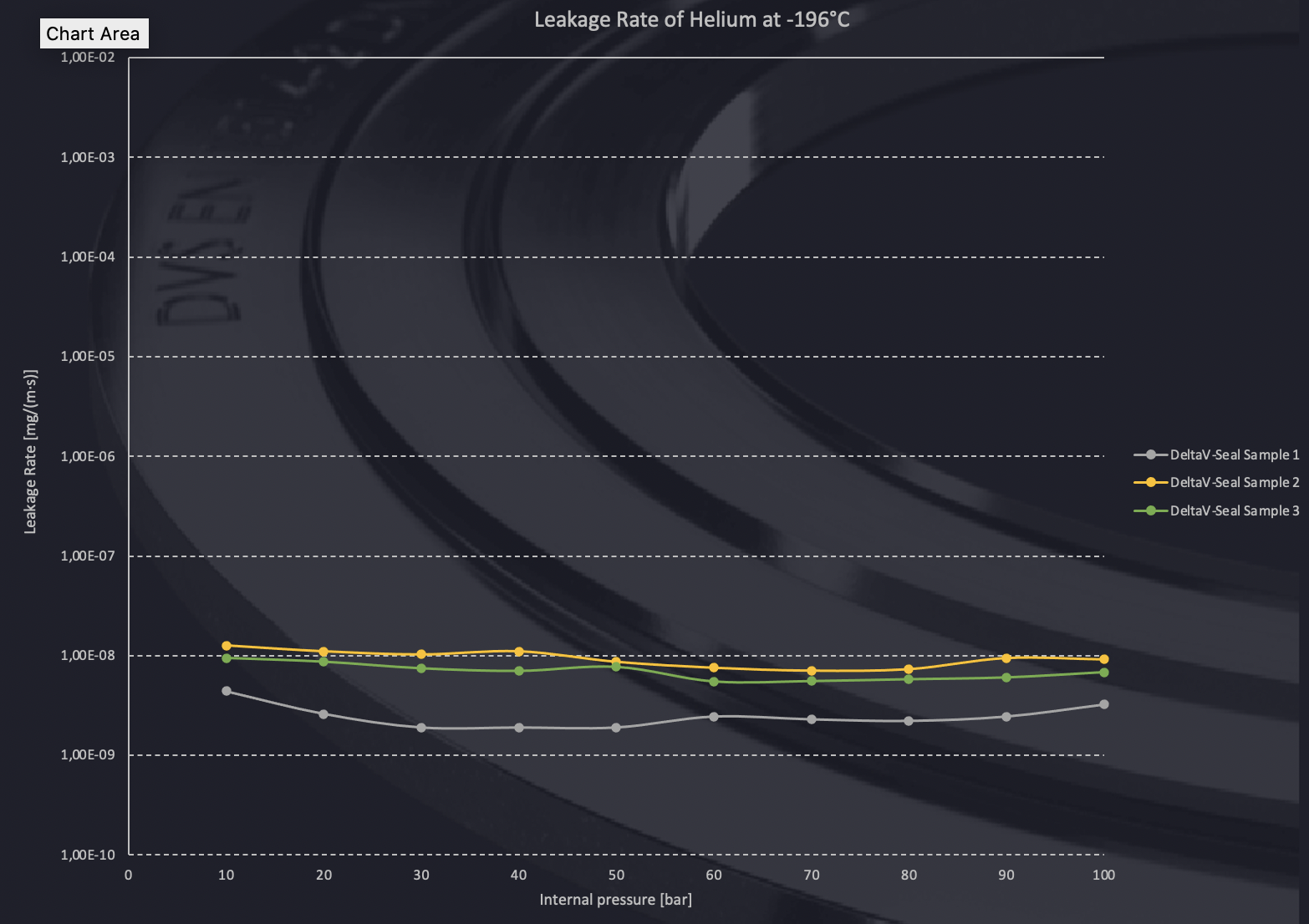 Helium-specific leakage rates at pressures from 10 bar to 100 bar at -196°C for the tested DeltaV-Seal dimension DN40 PN40.

The test results show that DeltaV-Seal has an extreme level of tightness also at cryogenic temperatures down to -196°C at pressures from 10 bar to 100 bar.

Based on these tests, it was found that the tested gasket “ DeltaV-Seal™ ” maintains a tightness higher than 10-8 mg/s.

Test certificate DeltaV-Seal at cryogenic temperature -196°C
Did this answer your question?